At home, I prided myself on knowing more than my friends about politics, in Italy even the names of the political parties are so incomprehensible (each of the political parties’ names seem to involve some combination of either a P or a D in the title) it is almost impossible to grasp the simplest of debates. Any question asked about the current position of each party is met with a lecture that requires a lengthy explanation, whereby one is required to understand the past twenty years, at least, of parliamentary politics to understand the current situation. An “anything but Berlusconi” campaign is reluctantly gaining ground mainly due to the lack of enthusiasm for the alternatives, but terror of another Berlusconi term. As in the UK, building an opposition to the failures of the right can’t be too impossible. But it seems no-one is able or willing to articulate the anger. Maybe politicians in Europe should watch the new film byRobert Andò, Viva la Libertà. 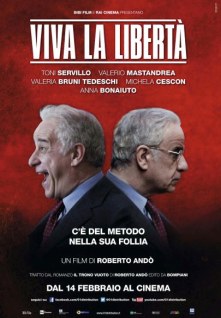 “Io sono qui per fare sì che domani non si dica:i tempi erano oscuri perchè noi abbiamo taciuto.”
“I am here so that tomorrow no one could say: times were dark because we did not speak out.”