The national Heritage Open Days are a chance to see some of the country’s most historic buildings and spaces opened up with thousands of free events celebrating our history and culture. This weekend there are events in Bradford at Undercliffe Cemetery and in Bierley and Saltaire. Last weekend I went for a nosy round the newly renovated St George’s Hall.

You might hear a lot of talk about how Bradford’s not the place it was. But how was it? How much do you know about the city’s history? You may know that during the industrial revolution Bradford was one of the richest cities in Europe, rising from a small market town to huge industrial city in record time. But for many of Bradford’s workers that wealth came at a high price in terms of 13-hour days, poor housing, poverty and an average life expectancy of below 20 in the mid-19th century. There’s a good reason that the Independent Labour Party was founded in Bradford following the Manningham Mill strike of 1890-91.

I’m all for a bit of Bradford nostalgia, but I’d rather hear the real stories behind the myths of a golden age. And despite being born in Bradford, I know very little about the places I grew up in and around and the stories of the people who built the city.

For example, did you know that St George’s Hall is one of the oldest concert halls in Europe still in use? Over its 150 year history, it has hosted the likes of Charles Dickens, Winston Churchill and Bon Jovi. The hall was often used for lectures and public meetings, including some of the earliest suffragette meetings.

The Heritage Open Day tour and talk focused on this aspect of St George’s Hall’s history and treated us to a behind the scenes tour. This was very much a people’s history of the place. We learned that in 1869 four thousand women packed into the hall to listen to Liberal MP, Edward Miall, promising what seemed to be the start of a new era for women. It was the first women’s only meeting (other than the MP of course) and showed that ‘Yorkshire women as well as its men knew how to cheer’. The meeting received national attention and one newspaper reported, ‘all the horror of women’s emancipation could be seen.’ The cheering and shouting showed women ‘losing all their natural dignity … [and] the quietude and graces so becoming to …(a woman’s) beauty.’

Which is nice. It was, however, over 10 years later in 1881 that the Bradford Provisional Women’s Suffrage Committee was established at a meeting in St George’s Hall. Our suffragette guide led us to the point where, in 1910, two suffragettes had hidden under the stage for 22 hours to interrupt a speech by the then Prime Minister Mr Asquith with cries of ‘Justice for women and freedom!’ 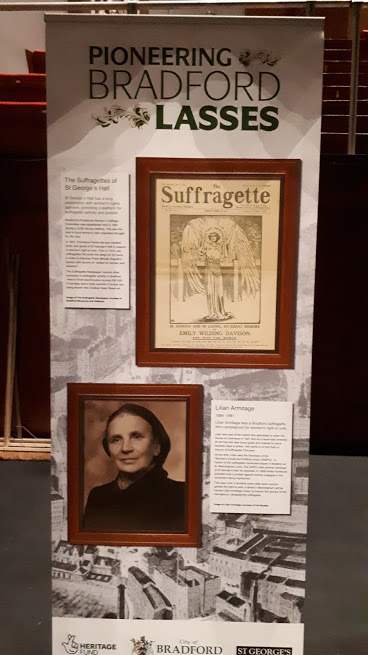 We were introduced to some pioneering Bradford lasses from Amazon Mary the Chartist agitator to mill workers, suffragettes, footballers, educationalists and pension campaigners. Julia Varley OBE, the teenage trade unionist working in Bradford’s mills and then throughout her life campaigning for improved working conditions for low paid people across the country; Margaret McMillan and Miriam Lord the pioneering campaigners who improved the health and education of many of Bradford’s poorest children; and Lillian Armitage, Secretary of the Women’s Social and Political Union, who in 1907 was arrested and imprisoned for 14 days for trying to enter Parliament with fellow suffragettes. We were lucky to have the descendants of Lillian Armitage in the audience too.

Bradford’s history is right there, touchable but strangely out of reach. We need to know our place and bring our radical past back to life. 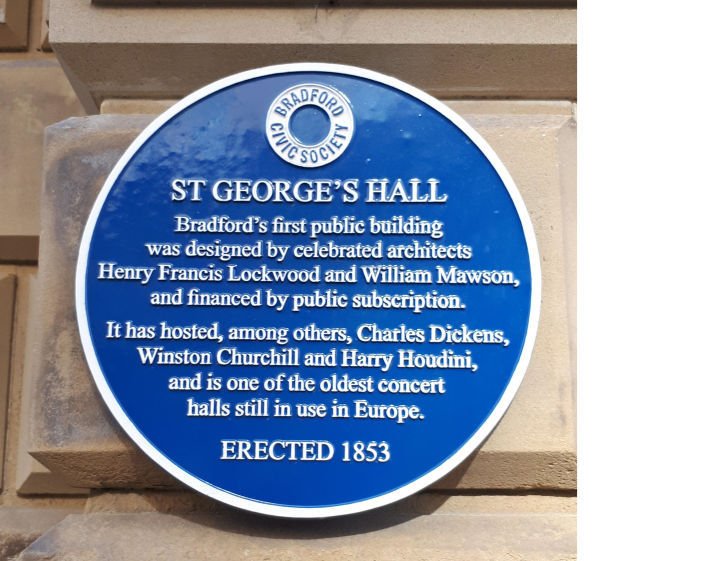 The Bradford Civic Society is leading a campaign to recognise Bradford’s people and places, putting up blue plaques across the city, such as the one at St George’s Hall in the picture above. There’ll be more unveiled in the coming weeks and months, for the latest visit the Civic Society’s website.

I particularly liked the idea of an empty photo frame in the last of the banners showcasing Bradford’s pioneering women. Who will fill it? Who are the current Bradford lasses working hard to make our city a better place? Who are the Bradvocates fighting to improve the lives of people in the city?

I’ll be starting a new podcast in the next few weeks to meet some of them, to tell Bradford’s stories in its own words and celebrate good people doing good things. If you’re interested in taking part, please let me know.

You can find out more about Julia Varley and working conditions in Bradford’s mills at the Bradford Industrial Museum. She is buried at Undercliffe Cemetery.