A-Z of the Bradford Literature Festival 2019 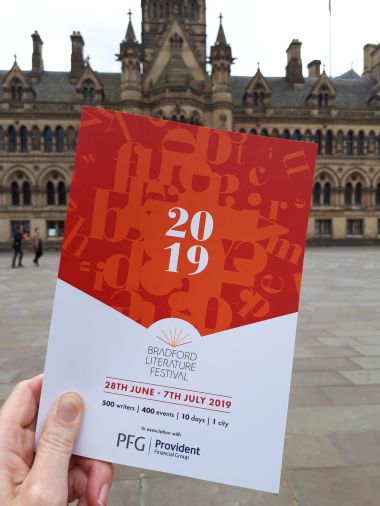 This is not your average literature festival. With such a brilliantly diverse range of writers and performers it’s almost impossible to choose from all that’s on offer. So I’ve created an A-Z of the best of what’s on at venues across the city.

All details can be found at: https://www.bradfordlitfest.co.uk/ Use the search function to find any of the events mentioned below. For more information also visit the Festival Hub at Centenary Square.

Artificial intelligence – Jeanette Winterson discusses her new novel Frankissstein, plus there are talks on whether robots will replace workers and a machine learning workshop.
Bradford at its best – Syima Aslam, Festival Director, has done a fantastic job creating one of the most accessible and interesting literature events in the country, exploring topical themes and bringing together the worlds of literature, politics, history and science.
Crime – Bradford writer A.A. Dhand discusses his crime novels set in the city and hosts a crime writing workshop.
Diversity – June Sarpong on inclusion, Kate Fox on autism, Saima Mir, Raifa Rafiq and Mariam Khan discuss their contributions to ‘It’s not about the Burqa’, and Origins of the Outsiders: the history of goth culture.
Environment – The Problem with Plastics, Trash Talk – Let’s Rethink Waste, Anthropocene: The Point of No Return and The Politics of Climate Disruption.
Film – at the City Park big screen (The Incredibles, Stardust) Media Museum (Kes, Moon Rush on the moon landing) and the Light Cinema (The Godfather, Peterloo, Ferris Bueller’s Day Off, Get Out, Pitch Perfect).
Gags – An evening of comedy with Shazia Mirza, Mandy Muden, Josh Pugh and Maureen Younger.
History – Talks include: Why are we building so many walls? Gandhi’s Relevance Today, The Opium Eaters, Remembering Peterloo, Anna of Cleves, Remembering Amritsar, The Life and Legacy of William Morris and Women of Westminster.
Identity – Bernadine Evaristo discusses her celebrated novel “Girl, Woman, Other”, Conflicted Identity: British South Asian Men, comedian Sofie Hagen discusses her memoir Happy Fat, an Imposter Syndrome workshop, and the world premiere of Asif Khan’s new play Imaam Imraan.
Jungle – Sunday 30 June sees City Park transform into a jungle, with mask and puppet making and The Jungle Book on the big screen.
Kids – four themed days over the two weekends featuring superheroes, witches and wizards, a jungle and a magical garden at City Park with free activities and performances, a baby rave, massage and sign classes, writing workshops, comics, games and face painting.
Laureate – Poet Laurate Simon Armitage reads from his new translation of Sir Gawain and the Green Knight at this special, candle-lit event.
Music – King Midas Sound, Saul Williams and Lady Leshurr perform at St George’s Hall, talk on the poetry and music of rapper Tupac, Madam Noor Jahan Tribute evening.
Nietzsche in the Pub – enjoy a pint and an informal lecture on influential German philosopher Nietzsche at the Brick Box Rooms.
Open Mic Night – Wireless Bar, North Parade hosts an open night of local poetry and spoken word.
Pop star – Luke Goss Q&A following the screening of After the Screaming Stops and in conversation with Peg Alexander the following day.
Queer – Polari LGBT Literary Salon, The Invention of Lesbianism, Rafiki film screening at The Light.
Religious – Bradford Cathedral is hosting talks on religion and secularism and a sacred poetry event, Faith in Humanity at St George’s Hall, and celebrating the 550th anniversary of the birth of Guru Nanak at the University of Bradford.
Sport – Football legend John Barnes in conversation with Final Score presenter Jason Mohammad.
Technology – Neil Gibb discusses change and disruption in a digital age in The Life and Death of Everything Now, Emerald Debate Series: The future of work with the rise of automation.
Ungrateful Immigrants – Juan Felipe Herrera, Dina Nayeri, Aysiha Malik and Saeed Khan discuss experiences of immigrants in the west, assimilation, integration and ‘worthiness’.
Visits – Police Museum tour, Film Heritage tour of Bradford film locations, Undercliffe Cemetery, Jewish Manningham, and walk in the footsteps of the Brontes from the Brontes’ birthplace in Thornton to Haworth with author Michael Stewart.
Working class – Lisa Holdsworth and Beth Johnson discuss working class women writers, plus a talk on What Does it Mean To Be Working Class Today?
X-rated – Me, my Sexuality and I. A frank discussion on women’s sexuality, pleasure and sexual freedom. With Stephanie Theobald and Lucy-Anne Holmes, chaired by Peg Alexander.
Young people – How to Become a Youtuber workshop at Bread + Roses cafe, create your own bullet journal and an introduction to writing plays at Theatre in the Mill.
Zorbing – a zorbing and boating pool will appear in City Park as part of the four themed family fun days over both festival weekends.

*A note on the funding controversy: Several speakers pulled out of events this week following the news that festival funding had been received from the Home Office’s Building a Stronger Britain fund, part of the wider Counter-Extremist Strategy. For a discussion of the issues, please read the following article. I am very supportive of and respect speakers’ decision to oppose such funding on the basis that “it reduces Muslims to subjects requiring de-radicalisation” and that this approach shouldn’t be normalised. But I also want to give my support to Syima Aslam and the Bradford Festival which has done so much good in the city over the past few years bringing arts and culture to the heart of Bradford. The growth and success of the festival have been truly inspiring. I hope that the comments of speakers are taken on board and next year’s funding is reconsidered.

An alternative event, Bradford In Our Own Words: Resisting Counter-Extremism Apparatus, will be taking place on Sunday 30 June at Speaker’s Corner. Details at: https://www.facebook.com/events/2248082352188732/