Brexit for dummies. It’s not the economy stupid.

The day has arrived. I feel obliged to write something about Brexit. I don’t want to. It depresses me. Only the English (and I think I mean English) could turn an exercise in democracy into such a negative experience. I’ve been writing this post for weeks and it has only got worse, people are thoroughly sick of the whole business.

Friends and colleagues in Italy ask me incredulously if we will vote to leave Europe. Leaders, economists, scientists, journalists from around the world say we must remain in the EU, that anything else is economic suicide. This is exactly the wrong tone to adopt with the Brits. We’re a contrary lot. We could well vote LEAVE just to spite you.

The debate quickly degenerated into a slagging match of ridiculous proportions (see flotilla). People were asking for facts, but when presented with them didn’t trust the answers or more importantly those providing them. And then of course there were the lies, damned lies and statistics. The LEAVE campaign has boiled down to the fact that we want our country back – presumably to hate foreigners who are all rapists, criminals and benefit cheats (whilst also taking all the jobs). However, it is far too easy to dismiss a potential Brexit in these terms.

There is little point lecturing voters in some of our ex-industrial towns about the economic folly of leaving Europe. They’ve been living it for the past thirty years. Most people don’t think things can get any worse. The Brexit referendum has become more a vote about the general state of the UK, of all that is wrong with our country, with Europe and immigrants taking the blame. There are huge and growing problems of inequality in the UK, of anger with the political establishment for failing to address basic problems of housing, jobs and economic decline. And the people giving the easy answers and false promises are the LEAVE campaign. What could be easier: fewer people = more jobs, more houses. Simple. Problem solved.

After days, weeks, months, years, decades of negative headlines towards Europe, against immigrants, of being told we’re not wealthy enough to provide essential services, it seems galling to think that other people are getting something denied to you. We’ve been force-fed a diet of hate and misinformation for years. The consequences of not challenging that narrative is being felt today.

I have heard people say, ‘I remember what Britain was like before the EU’, but they seem to mean before Thatcherism. Europe is not to blame for the huge loss of our industry. There aren’t a load of Eastern Europeans down the mines. Europe is not to blame for our low wages, insecure contracts, poor productivity and lack of training and investment. Europe is not to blame for us not building houses, for letting entire communities fail and rot. After the 2008 crash, Nobody was held responsible for that calamity. The Tories made the poor pay for it instead – slashing services, closing libraries and cutting benefits.  We voted for austerity and now we want someone to take the blame.

The surprise from some establishment REMAIN politicians that their expected vote is not with them, is not listening to the economic scare stories is palpable. These voters have been ignored for years. They’re not stupid, just angry. A vote in this referendum will count. It will mean something. They want to vote for something, anything to change. They feel left behind, forgotten. After years of feeling powerless and irrelevant, they want to feel that they have the power to change something. Stop the world I want to get off. They want someone to put a break on the insecurity, to feel like we have an element of control against the pervasive forces of globalisation.

But a Brexit won’t give them what they want. The senior LEAVE politicians have absolutely no intention of addressing any of these frustrations. I have absolutely no faith that Johnson, Gove and Farage would invest in our communities with any of the money they think they might save following a Brexit. These are the politicians who have consistently vote against better working conditions, workers’ rights and benefits, against measures to tackle tax-avoidance, who support the privatisation of the NHS. These are the people responsible for selling off half the country’s assets – you can talk all you like about sovereignty but who owns our water?

What would a Britain after Brexit look like? LEAVE campaigners seem to be promising the world. Yet these are the very people who would sell the UK to the highest bidder, cut workers’ rights in a rush to the bottom to make us competitive – you can almost hear the post-Brexit arguments now ‘Well, we knew it would be tough after Brexit, we knew we would have to tighten our belts.’ Does that sound familiar?

The LEAVE politicians think that economic collapse is a price worth paying. As ever, I fear it won’t be them paying the price. Sadly, whatever the outcome of today’s vote the divisions and frustrations that have been so cynically whipped up will REMAIN. The work to change that must start tomorrow. 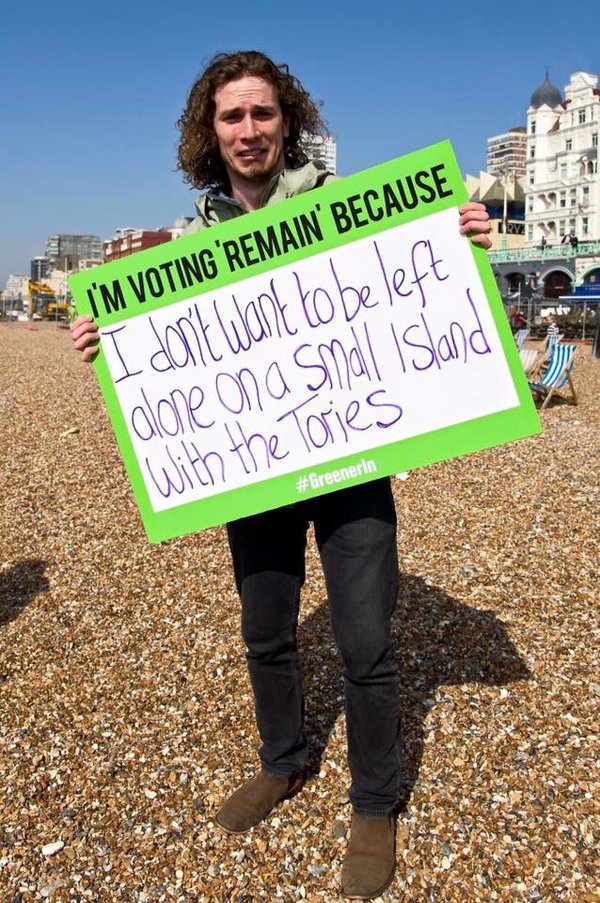