International Workers Day, Primo Maggio or May Day. Wherever and whenever you celebrate do it with Pride.

Happy May Day! Here in Rome we celebrated on May 1st itself. In the UK, you’ll have been enjoying the bank holiday today. Every year in Rome the main trade unions organise a huge concert in Piazza San Giovanni with hundreds of thousands of people attending. Other Primo Maggio traditions include the obligatory picnic with raw fave (broad beans) and pecorino cheese. You have to do this. It’s the law. 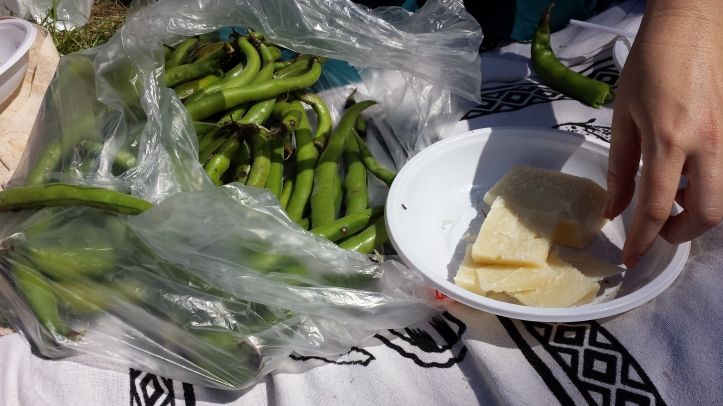 Traditionally, May Day in both countries was celebrated as ancient welcoming of spring. Rumour has it that the festival actually derived from the Roman festival of Floriana honouring the flower goddess Flora. In the UK, I definitely remember dancing around the maypole in the school playground, but sadly I was never crowned a May Queen.

Over 100 years ago the original International Workers Day was organised on May 1st to promote the campaign for an 8 hour working day. Without these trade union campaigns we wouldn’t have a welfare state, an NHS, a minimum wage and workplace protection. May Day was only made an official public holiday in the UK in 1978, showing a distinct lack of regard for the history and achievements of the labour movement and a real stinginess in letting us have a day off. The British media have fostered a rather dim view of trade unions in my lifetime,  summed up rather well by the tendency to portray workers “as wasters who are always only inches away from stealing the computers and shitting in the cupboards. Bosses meanwhile are great. So you’d better back off unions or we’ll pick up our balls and fuck off to Taiwan. So, not ‘greedy’ or ‘bullying’ at all then.” (Published under the CBI section in Is It Me Or Is Everything Shit?)

So, in order to restore some balance on this day of celebration for the workers, can I suggest a little May Day viewing? Pride is a film which should be watched by anyone who thinks that politics can’t achieve anything, that solidarity isn’t important, that things can’t change, that people don’t have the power to make a difference or an impact. It’s an antidote to cynicism and superficial politics. It’s about reaching out and making connections in all the right ways. One of the best, most inspiring films you will see this year. It’s also really funny.

The Labour Party was founded in Bradford by the trade unions. The trade unions continue to campaign for properly paid skilled jobs, affordable house building, investment in the green economy, high quality childcare and a strong defence of our public services rather than the reduction in provision through privatisation and outsourcing.

Please vote on Thursday. But not for UKIP or the Tories.