Last night Rome hosted a unique concert to commemorate Remembrance Day Il Giorno della Memoria and the 70th Anniversary of the liberation of Auschwitz. Unique because this music was music created by those interned in the camps. Jazz, cabaret, folk songs and hymns all sung, played, created and enjoyed during those most dark and terrible days. Music that was composed, hidden, passed on, written on scraps of toilet paper, smuggled out and lain forgotten for decades.

Tutto Ciò Che Mi Resta was the world premier of a concert (set to tour other European cities) which brought together the music lost for so many years in celebration of the survival of human spirit even in those extremes of cruelty and hatred. Shown live on Rai5, you can watch it on their website for the next 7 days. 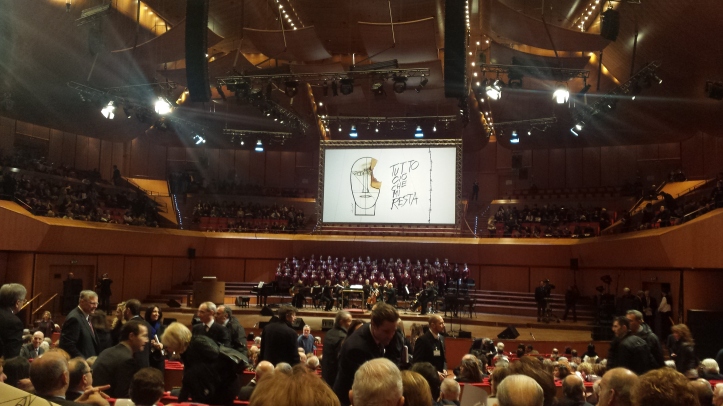 The concerts are part of a larger project by LastMusik to promote and support the work of Franceso Lotoro, an Italian pianist and musicologist, who has made it his life’s work to track down and recreate these lost pieces of music, before they are truly lost forever. A documentary to be released later this year tells the story of Francesco Lotoro, his incredible quest and the story of the composers, the men and women whose courage, strength and humanity he wants to honor by keeping their music alive.

“Every month, another survivor dies, and with that person, perhaps a piece of music disappears. I live for the dream of seeing this research finished, so that in the future this music will be studied and performed …”. Francesco Lotoro.

Many congratulations to all those involved. The songs and stories were relived and retold as they should be, giving voice once again to those who never left the camps. A true lesson from history. To remind us all that never again, never again, should such persecution, such attempts to annihilate an entire people ever be allowed to happen again.