Where to Watch the World Cup in Rome 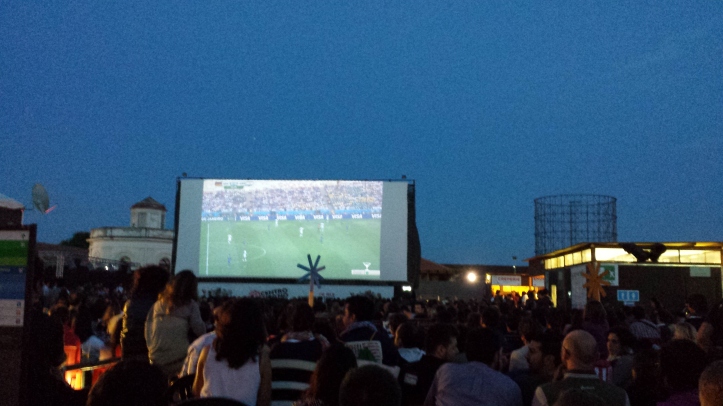 The World Cup is finally underway in Rome with Saturday’s victory for the Azzurri against England. Despite the result, I came away happy, happy to be proved wrong. An England team passing, keeping possession, purposeful. Here’s hoping that this new England can continue.
On Saturday, bars, piazzas, restaurants and communal spaces were thronged with horn-blowing, over-excited supporters. With a midnight start, the celebrating went on long into the night. The World Cup in Rome starts now, but where to watch it? Here are a range of venues with something to suit everyone.

I have watched many a lacklustre England performance in bars around this famous market square. Most bars have big screens showing every match. The beautiful outdoor setting helps my mood, as do the drinks. Dancing, singing and flag flying are promised if Italy win. 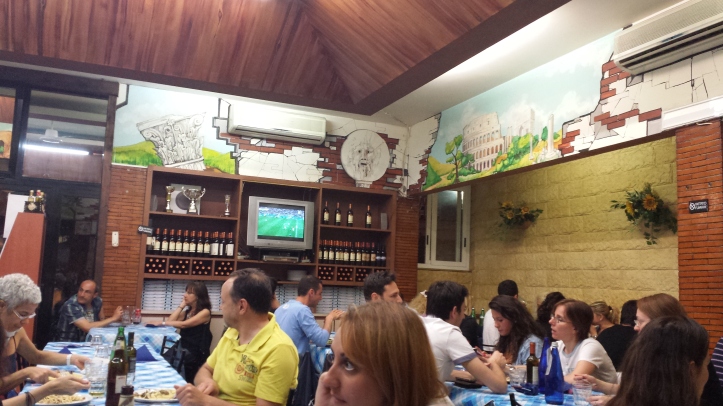 Known to me as the Football Restaurant, this blue-tabled-clothed Roman restaurant/pizzeria shows football matches year round. In the back room, the walls are lined will football scarves from around the world. The big screens usually show Italian league matches, but now show matches from each World Cup group including those after midnight. During one England match in 2010, we were so busy tucking into steaks, we had to be told by the disbelieving Italian diners that England had scored. The food must be good.

Ex Mattatoio Testaccio – for non-Italian games with music and food 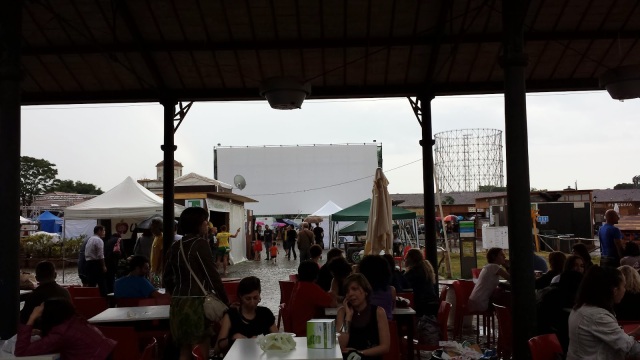 This ex-slaughter house has been transformed in recent years into an art gallery, market and eating and drinking venue. During the World Cup, they will celebrate with the AltroMondiale for non-Italian fans, bringing together music, food and of course football from other participating nations. Each evening will be themed around one of the countries with music and food from that country the highlight of the evening (other than the football obviously).
Unfortunately, they will only be showing one match a day. Check the website for details.
Città dell’Altra Economia – Testaccio – Ex Mattatoio
http://www.eutropiafestival.it/ristoro/

In England, watching the match at your local pub is a tradition which is hard to break. There aren’t many pub-pubs in Rome, but if you want the home comfort of a traditional football watching atmosphere then Scholars is the place for you. Air con during the hot days is also a plus. The 18 screens will be showing every match.
Via Del Plebiscito 101b
http://scholarsloungerome.com/

Blackmarket Tiber – for a cool, river side game with DJ set too

Every summer, Rome opens its river banks to bars, restaurants, stalls and even a cinema. What could be better than sitting by the side of the River Tiber as you watch a match, escaping at least in part the heat of a Roman evening? Having moved for the summer from their usual dark and dingy (in the best possible way) home in Monti, Blackmarket has comfy squishy chairs and a relaxed atmosphere in which to sip your beer, wine or cocktails as you watch. There is a good and unusual aperitivo too instead of the usual football watching fare.

Big Screens are also to be found: