What a weekend of sport! City go up and Rome Gaelic Football Team goes from strength to strength!

I cannot believe that City have managed two trips to Wembley this season! Must be a record and something to celebrate for all Bradfordians. Wibsey must have been wild, along with the 25,000 in the stadium. Amazing season!

Funny how these things coincide, there was also a great day of football of an Irish kind in Rome on Saturday too with the newly established Gaelic Football Club of Rome hosting the second round of the Italy/Switzerland Regional tournament. 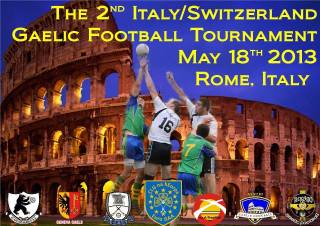 As you can imagine, I went purely as a spectator to support the Rome team in part made up of my work colleagues (women’s team almost all, men’s team 2). Teachers are a tough, vicious lot. As my rugby-playing/supporting friends in Bradford know, I’m more of a football girl. I can’t watch my friends playing rugby. I have to watch from between my fingers, eyes half closed, cringing, “Ow, oh no, ouch, painful, eeek, ugh that looked nasty, get off him!” This is my usual standard of comment on the game. Hardly surprising when one of my friends broke his neck playing (miraculously now fully recovered) and another spent most Saturday nights in casualty with some minor stitching need. Thankfully, the Gaelic games were injury free (at least the ones I saw) a couple of bumps and scrapes here and there. But that’s allowed.

Despite only having been playing and training together since last autumn, the Roman teams did themselves proud. Despite the scorching sun, they ran and ran for their team. It was tiring watching them I can tell you. Just trying to follow the rules was enough for me – kicking, carrying, bouncing, solo-ing, hand-passing, but not throwing?! Confusing. But then I don’t understand rugby either (I can explain the off-side rule in football however before you start).

The players were a proper international mixture: Irish, Italian, English, Belgian, Scottish, Swiss and Australians. Great team spirit and enjoyment of the game was shown by all, with both Zurich teams taking the honours. Blood, sweat and tears, but worth it in the end.
Training in the real sense comes post-match though. Irish stamina in the pub, will the Europeans be able to match it?

The Rome teams are always looking for new members, especially as some members are leaving Rome for newer climes, and brand new Gaelic teams around the world. Anyone interested in training with the teams should follow the link below.
https://www.facebook.com/RomeGaelicFootballClub?hc_location=stream
The Rome team meets for training every Thursday night at 8pm at the Roma Rugby Ground on Via delle Tre Fontane, Metro EUR. There’s no need to have played before as full training is given, with a little Irish charm thrown in for nowt. As for me, I’m not even allowed to play netball. I get a bit too competitive …